Schneider and Troy can be heard playing Lou Harrison on DRAM, and many other recordings of Harrison and Adams’ music can also be streamed there.

She was joined by Soundwaves curator Jeff Schwartz on bass and drummer Peter Valsamis.

Reason’s duo album with shakuhachi player and vegan chef Philip Gelb can be heard on DRAM; Valsamis appears on DRAM with the free jazz trio Sound on Survival, with Lisle Ellis and Marco Eneidi.

An audio excerpt from this performance:

Cline has collaborated with artists from Julius Hemphill to Harold Budd to his guitarist twin brother Nels and appears on numerous albums on DRAM. His Flower Garland Orchestra, featuring Agbabian, was a highlight of last year’s Angel City Jazz Festival.

In 1977, Vinny Golia released his debut album Spirits in Fellowship on his own Nine Winds label. Since then, Golia and Nine Winds have been essential elements of L.A’s musical underground, fostering and documenting the work of generations of artists. The Nine Winds catalog is now available to SMPL cardholders through DRAM.

Wednesday June 15 at 7:30 Golia brought his ensemble to SMPL for a Soundwaves performance.

He explained some of the structures and techniques he uses:


Then the group played a continuous set based on several of his compositions:


Photos from this show were featured on the front page of the Santa Monica Daily Press: 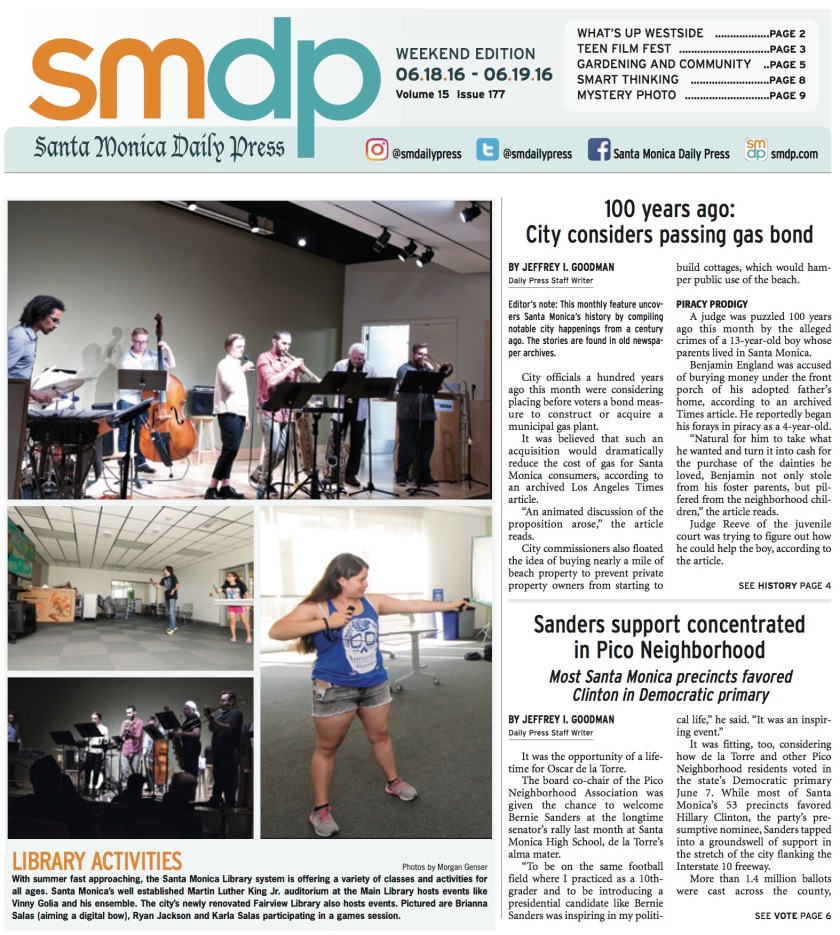 Wednesday May 18, at 7:30PM, Soundwaves welcomed flautist Nicole Mitchell. The recipient of awards ranging from Downbeat magazine’s “Best Jazz Flute” to the Chicago Tribune’s  “Chicagoan of the Year,” as well as numerous grants and commissions, she now is a professor in the Integrated Composition, Improvisation and Technology program at UC Irvine.

This show was been recommended by Surf Santa Monica and MetalJazz ( the blog of ex-LA Weekly music critic Greg Burk).

On Wednesday May 11, at 7:30PM, Soundwaves presented composer Anne LeBaron. Her music ranges from solo harp improvisations to multimedia operas. It has been performed internationally and widely recorded. She has received Fulbright and Guggenheim grants and the Alpert Award, among other honors, and holds the Roy E. Disney Family Chair in Musical Composition at CalArts.

At the library she introduced performances of her work by some of Los Angeles’ most celebrated new music specialists: pianist Mark Robson, the Panic Duo (violinist Pasha Tseitlin and pianist Nic Gerpe), and the WasteLAnd ensemble, who The New Yorker’s Alex Ross recently called “one of the country’s most far-sighted” groups.

The concert featured “A – Zythum,” a piece commissioned by the Los Angeles Public Library Foundation in honor of the Oxford English Dictionary, which premiered in March at the Hammer Museum.

In March Soundwaves welcomed saxophonist/composer Ulrich Krieger to present his massive set of pieces for tenor saxophone and electronics entitled “Universe.”It has four parts, each approximately one hour long, each using a different approach to the instrument: “ReSpace” is for saxophone-controlled feedback, “RAW” for electric saxophone and pedals, “Quantum” for amplified saxophone, and “Cosmos” for saxophone alone. The first two have been recorded for a new double-CD on the XI (eXperimental Intermedia) label, whose back catalog appears on DRAM. Krieger discussed the entire series, played excerpts from the CD, demonstrated a variety of extended saxophone techniques, performed segments from the unreleased sections, and took questions from the audience.

Soundwaves is a year-round concert series at the Santa Monica Public Library featuring composers and musicians who appear on the Database of Recorded American Music (DRAM) streaming service. SMPL is the first public library to offer DRAM to its patrons. Programs are held at 7:30PM in the Main Library's Martin Luther King Auditorium at 601 Santa Monica Blvd, Santa Monica, CA, 90401. Admission is free. Soundwaves is supported by the Friends of SMPL and organized by Jeff Schwartz.